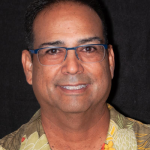 Joe Uptain-Villa joined the Board of Directors of the Lincoln Hills Foundation in September 2019.

His strong belief in giving back to his community began at a young age when he began volunteering at a VA hospital. Uptain-Villa graduated with a Doctorate Degree – Chiropractic and also has a B.A. degree in Psychology.  He had a long-term practice but ultimately made a career change and taught and coached at both middle school and high school until his retirement.

During his time as a teacher he had leadership roles in Del Oro high School’s SOS (Save our Sports) non-profit responsible for significant fund raising over an 8 year period.